The project focussed on empowering communities to gain access to basic services such as water, sanitation, health and education. Instead of providing services directly to communities, we used a rights-based approach that educated people about their rights and gave them skills to demand they are fulfilled. This approach empowered communities to help themselves, and has also resulted in greater breadth and diversity of impacts than direct service provision because they can use these new skills to address a wider range of community problems.  The project included training in new skills in advocacy, negotiation and participatory governance so communities can demand accountability from their duty bearers, the District Assemblies (DAs, local government). We focussed on clean water and sanitation, but communities were made aware they have the same rights to services in education and health, and that they can use the same skills to advocate for those rights.

You can read more about the project’s background and updates here.

What did we do?

We worked in the Northern and Volta Regions with communities that are very marginalised and disadvantaged and have the poorest access to services. None of them had facilities for clean water, and only a few had a school. These were:

The project participants included around 235 civil society and community organisations, 60,000 people mainly in rural communities who benefited from the awareness activities (durbars and community radio), 30 district assembly officers, staff of the National Commission for Civic Education (NCCE), and at least 10 media representatives from various radio stations and newspapers.

These are links to further information on the project and activities:

What has changed as a result of the project?

Communities now know their rights to basic services and know their DAs are the duty bearers responsible for fulfilling those rights. They also know they are allowed to participate in budget decision-making meetings, and that they are permited to visit their DAs to ask for service provision. This is all new information for the communities and they now write advocacy letters and lead community visits to their DAs to advocate for service provision. They also participate in budget decision-making meetings to voice the concerns of their people. The DAs have even been encouraging them to attend, warning them that if they don’t, DAs will make decisions on their behalf, which may not always reflect communities’ most pressing needs.

Communities beyond those reached by the formal training activities have also been visiting their DAs, motivated by the information they learned from the community radio programmes. This broad awareness has really strengthened the outcomes of the project by reaching many thousands more people than the durbars alone, and by helping communities put pressure on the duty-bearers to fulfil their duties. They are no longer only passive receivers of information and decisions, but are now active in advocacy to demand their rights, decision making for their communities, and making change to improve their own welfare.

Some results have been really unexpected…

In practical terms, the most positive, exciting and rewarding of the unexpected project outcomes has been the actual provision of services to some of the most marginalised and disadvantaged communities as a direct result of their advocacy actions to their Das. We hoped this would happen in the long term, but by year 2 there was already progress in actual service provision. Various examples exist:

The project has also been helping communities to overcome disagreements. For the first time ever, the Chief of a community near Kpando in the Volta Region travelled to the neighbouring community that the Chief’s own community had been in conflict with and used his new skills for negotiation and dialogue to resolve all their problems. Similarly, in the Northern region, two neighbouring project communities had been arguing over a piece of land on their shared boundary for many years. FoE-Ghana’s project coordinator brought both communities together and mediated between them. His suggestion for the piece of land to be used for a project to benefit both communities received much approval from both, and now there is no more disagreement.

The support from the DAs and their willingness to participate and build positive relations with communities has also been unexpected. Without their support and commitment, it would have been much more difficult to achieve the broad impacts. The initial fear at the design stage was that they may be averse to changes and undermine progress. Indeed, communities themselves generally felt that politicians are not open to discussing development options, and that criticism of them would label complainants as enemies of the political hierarchy. Communities suffered in silence instead of constructively engaging government. But many things have changed as a result of the project. Bringing these actors together during training sessions has improved mutual trust, confidence and accountability. The DAs are also more honest about their capacities to meet the communities’ demands. In the past, they would say ‘we have heard you’, and that would be all, but now they try to communicate their financial challenges and also seek alternative solutions (e.g. link communities with development NGOs active in their areas).

Invitations to visit communities have been taken up by DA representatives, including very senior ones, and this for some has been the first time it has happened. The DAs have been keen to listen to communities, to provide services when they can, to encourage communities to participate in budget decision-making so their needs and aspirations can be accounted for, and to link them with other organisations that can fulfil their needs sooner when immediate DA budgets are lacking. Now the work is on to ensure this situation is sustained, improved and widened to reach other districts.

The awareness raised in communities has also empowered them to realise they can also help themselves to improve their own situations. Many communities have taken proactive ‘self-help’ measures and become ‘Open Defecation Free’ communities, which is helping reduce diseases such as cholera, diarrhea, dysentery and typhoid. Communities learn a great deal from one another and follow the good examples of other communities, so it is expected more will follow their neighbours and take similar actions. Many of the project communities now keep their environments tidy and clean because they understand the related health and environmental benefits. Some cited improved community sanitation as the most beneficial achievement of the project. Northern Region DAs explained they are now encouraging communities away from provision of sanitation facilities towards ‘Community Led Total Sanitation’ (CLTS), and asked FoE-Ghana to support further work on this area. It is well noted for our future projects on water and sanitation. It actually has broader impacts to because it includes education on sanitation and health, and can also bring about change in more communities because of the lower costs of education and empowerment compared to service provision.

The participants have also applied their new knowledge to other areas of their lives. At the project’s evaluation meeting in the Northern Region, one person commented that, besides lobbying to get a borehole, they have also secured two rabbits per person for 250 people with the intention of them multiplying and use them to improve household nutrition.  Communities have even been applying their new skills to other challenges: one community said they have used the information they learned on budgeting to establish their own savings and loans scheme. This shows innovation and illustrates how much communities really can achieve for themselves when supported with the right information, skills and tools.

The training has also helped participants improve other relationships besides those between communities and their DAs. Women at the final evaluation meeting noted how the project has benefited communication with their husbands and other family members, as well as people in their compound houses and communities, and that these relationships are now more peaceful and cordial. Many women also said their community meetings are now more positive because they can work together and communicate more effectively, whereas before they would squabble and the meetings break up without anything being resolved. After their meetings, the women now go around the community to explain what was discussed to those unable to attend. The project has succeeded in improving communication on so many levels at family, household, intra-community, and inter-community, as well as between communities and their DAs and Unit Committees.

Besides all the learning from the above results, we also learned…

Empowering, training, educating and campaigning for a fair and sustainable world.

We believe that an equitable and sustainable world where the rights of all people and all life are respected is possible.

We educate, train, empower, and campaign to make this world a reality so that one day all people, without discrimination, can meet their needs and lead happy, fulfilling and rewarding lives while sustaining the environment that all life depends on. 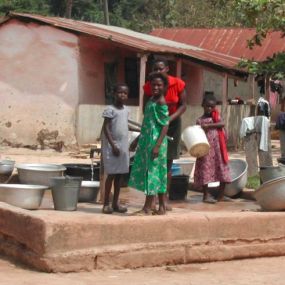 Alphabet on wall of kindergarten school 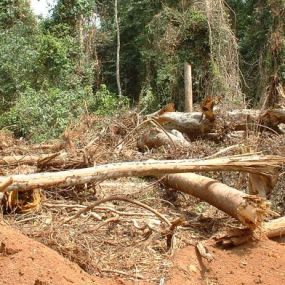 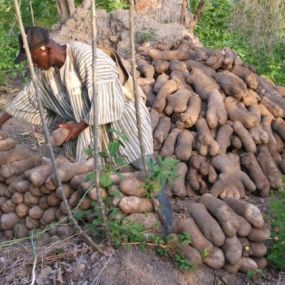 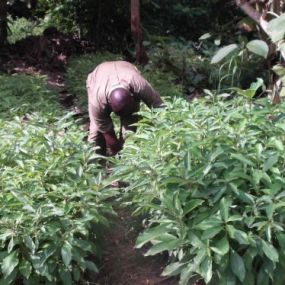 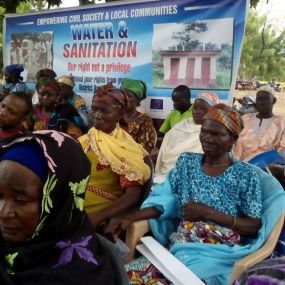 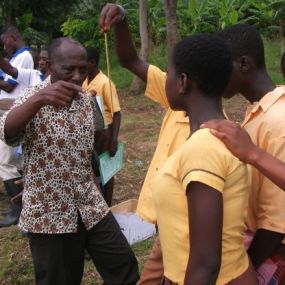 Mr. Manu teaching the children how to monitor the water quality at Lake Bosumtwe

A school for the little children

Sampling for monitoring the water quality at Lake Bosumtwe 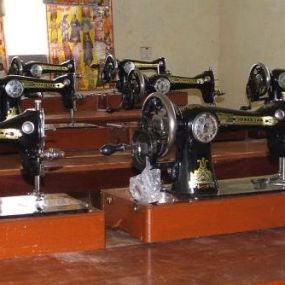 Sewing machines at the Youth training Centre in Yendi

A school for the little children

Celebrating as the school is finished

Women being trained as seamstresses

Cut tree in the forest 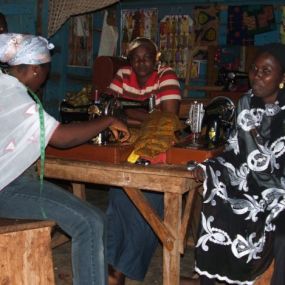 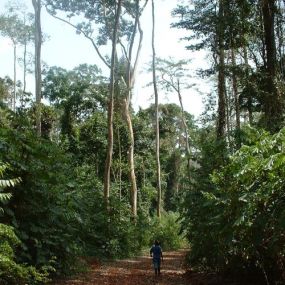 Road through the forest 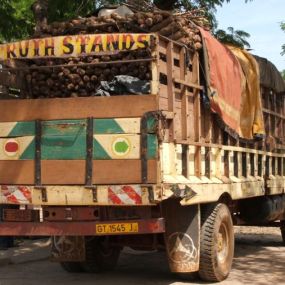 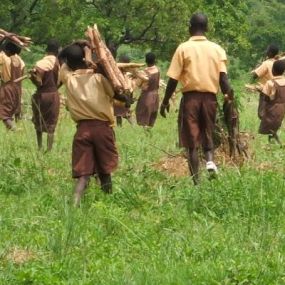 Carrying stakes to mark out for tree planting on school grounds

Crafting a fishing canoe in the forest 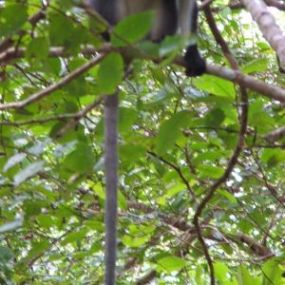 Staking out to mark for tree planting 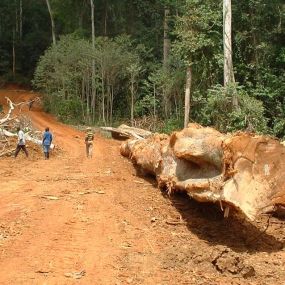 Cut trees ready for transporting out of the forest 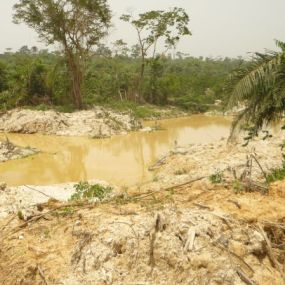 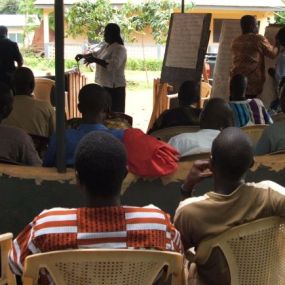 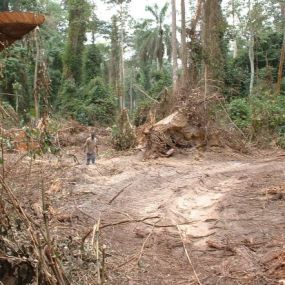 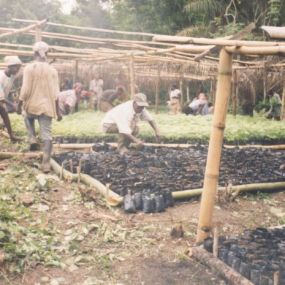 At work in the community tree nursery

Women sharing her opinions on water and sanitation service provision 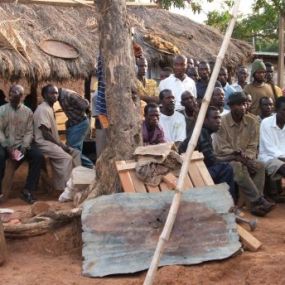 Consultations with farmers about yam farming and climate change impacts

Fishing canoes; no motorised boats are allowed on Lake Bosumtwe because they will disturb the fish 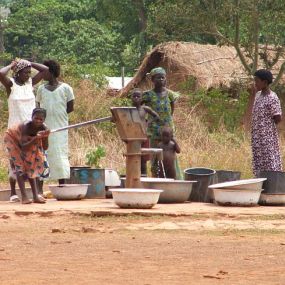 Community durbar on rights to water and sanitation, Northern region 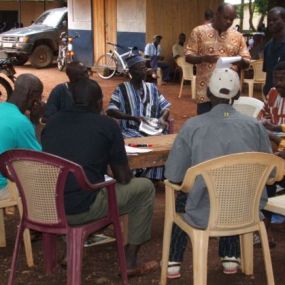 Consultaitions with farmers about yam farming and climate change impacts

Cutting the forest to make way for yam farming 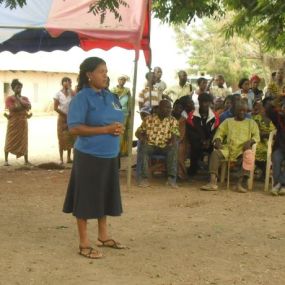 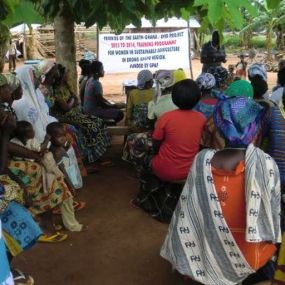 Training in sustainable agriculture at Derma 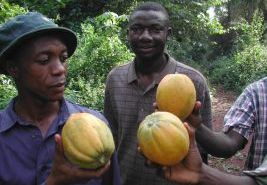 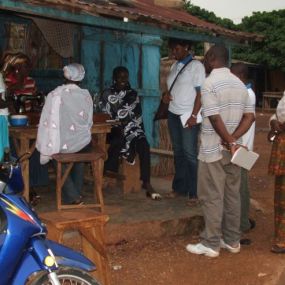